SALLIE! She was a lady; she was a soldier too.

Sallie was a brindle Staffordshire Bull Terrier (or Pit Bull Terrier – it is unclear) who served as the regimental mascot for the 11th Pennsylvania Volunteer Infantry during the Civil War.

She was given to 1st Lt William R. Terry as when she was just 4 weeks of age. Sallie was raised with the men of the regiment and they were fond of her. She knew the specific drum roll announcing reveille. Sallie followed the men closely on marches and to the battlefield, always on the front lines.

In a spring 1863 at a review of the Union army, Sallie marched along with “her” soldiers. Abraham Lincoln sat in the center of the reviewing stand and spotted the dog. He raised his famous hat in salute.

At Gettysburg, Sallie became separated from the 11th in all of the chaos. Three days later they found Sallie guarding the bodies of the dead and wounded soldiers, herself unscathed.

In 1865 at Hatcher’s Run Sallie was struck by a bullet to the head. She was killed instantly. She was buried on the battlefield while under heavy enemy fire.

In 1890 the surviving veterans of the 11th Pennsylvania dedicated a monument on the Gettysburg battleground which contains a likeness of a sleeping Sallie.

This is the only known picture of Sallie.♥ 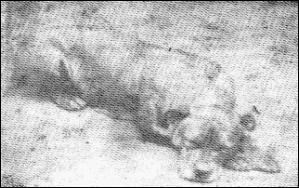